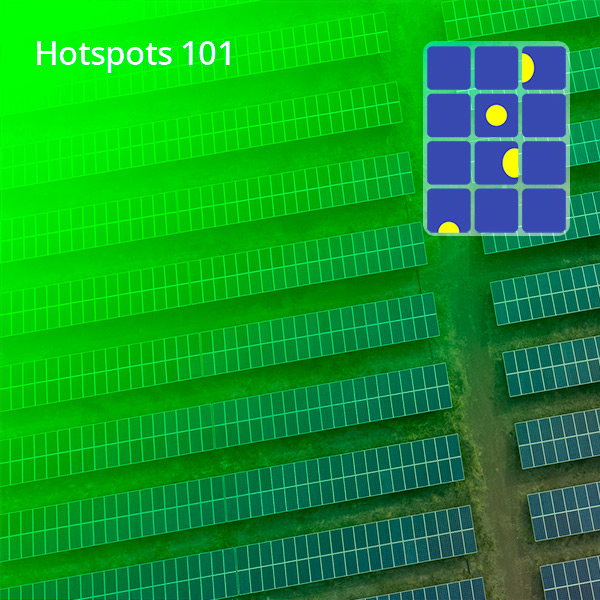 Open circuits are most often than not a result of wiring failures at the string level. Open circuits are caused by a fuse blowing up in the string or a missed connector along the string. Sometimes, modules can even end up being wired into the state of short-circuiting, giving rise to doubts regarding the long-term stability of the module and safety of the site.

Aerial Infrared inspection is used to distinguish strings in open versus short-circuit due to its simple techniques. Two converse phenomena arise in these cases. 1) There is no flow of current within the string whenever there is an open-circuit, leading to dissipation of the power generated in the module as heat uniformly. 2) In short-circuit, the current flow by taking the path of least resistance. However, there is a variation in the cell resistance between the modules and within the module itself which causes non-uniform heating across the panel, thereby giving it a speckled look

A string that is wired in short-circuit may be in that state due to being wired in reverse at the combiner. Figure 2 gives an example image of a safety incident that resulted from such an error.

Module to module connection error is another instance of modules getting miswired into a short circuit. Figure – shows wrongly connected module terminals in a tracker structure, which resulted in a partial open circuit and partial short circuit string.

Most short-circuits are more liable to arise during construction of the site whereas standard O&M activities are less likely to be a cause of these short-circuits. An effective commissioning process is an efficacious answer to this problem where regular inspections help identify all occasions where short-circuits are being caused, ensuring a reduction in safety concerns.

A total quality management program that ensures complete checks at all levels of operations of a solar farm, starting from site construction to day-to-day maintenance activities, ensures a proactive handling of short-circuits by preemptively identifying errors. It has been found that aerial infrared images are among the more effective ways of determining anomalies in the site, especially if it comprises modules with thin films. These thin-film modules are constructed in a manner that several strings are wired using fused harness giving rise to all the more chances of an open circuit. Such close wirings are hard to detect through regular methods, even during combiner performance monitoring – going undetected even during DC voltage checks in the combiner.